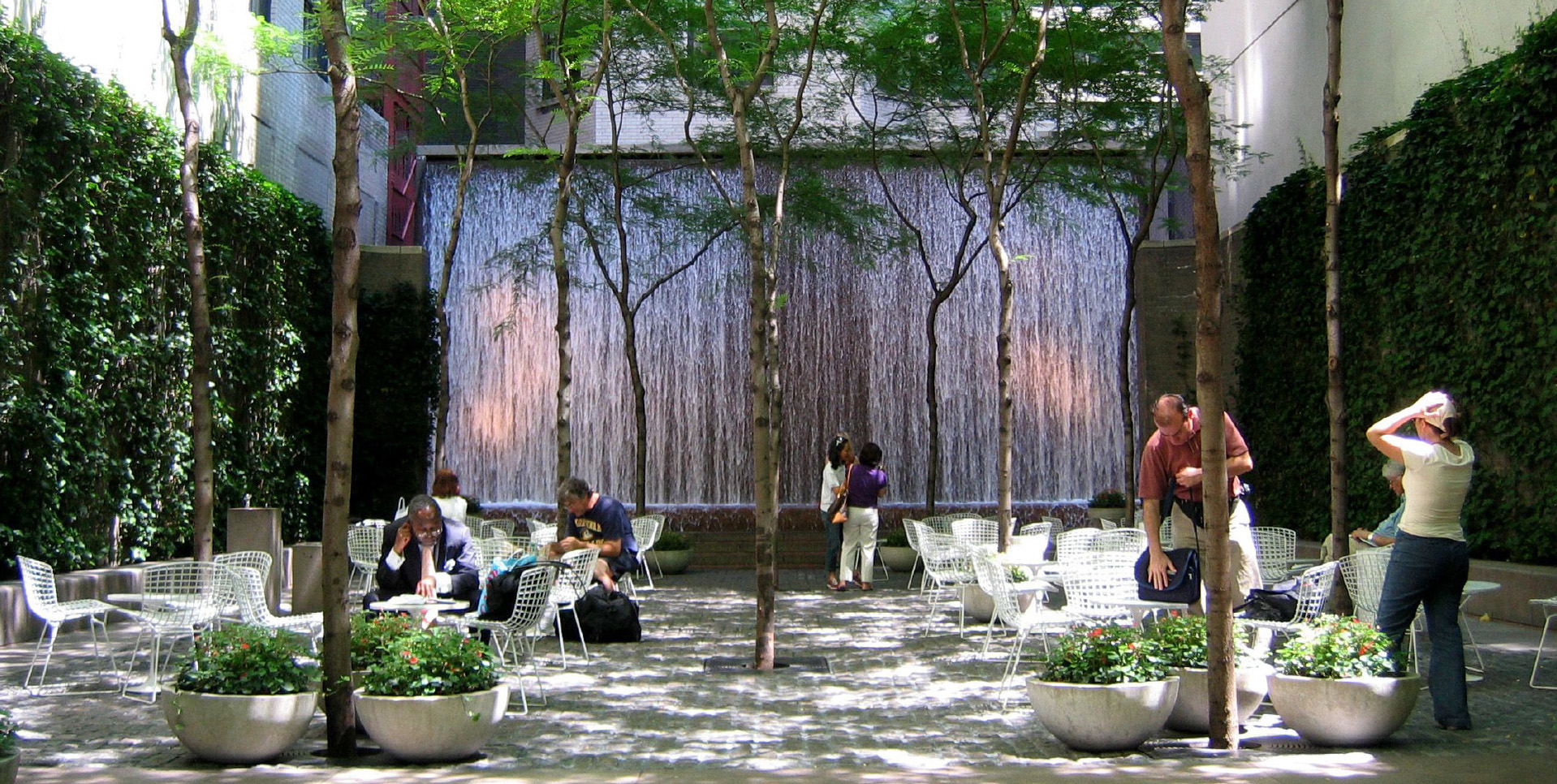 A Case HistoryDesign with WaterNews

By Gianfranco Deganello 15 Gennaio 2021 No Comments

Unlike what happens inside our houses – where, thanks to the enhancement of negative ionization, it is possible to cut PM10 by up to 70% – it is hard to significantly impact on the air we breathe in our cities. From this point of view the case history we are about to analyze acquires even more relevance as an excellent example of the possibility of designing and building an indoor or outdoor fountain which is not just sustainable, but also capable of fostering a comfortable microclimate that can regenerate us.

It is in fact believed that, if well designed, even small waterfalls and fountains with creek-sized water flows can maintain several thousands of negative ions per cubic centimeter of air in their close proximity.

The important thing is that the water leap should be as high and fragmented as to produce a sufficient Lenard effect.

The case we are referring to is Paley Park in Manhattan, NY, also known as Pocket Park for its tiny size. Let us admire the foresight with which the two New York architects Robert Zion and Harold Breen Associates were able to masterfully put this theme into action in the ‘60s.

The name ‘Paley Park’ comes after the former CBS president William Paley, who relied on his own organization to finance this project as a tribute to his late father. With this project Paley meant to establish the prototype of a new kind of private public space.

Paley indeed closely cooperated with landscape architects and contributed to the definition of every detail, embarking himself on the hard enterprise of designing a park within a 30×13 meters site.

Once Paley Park was finished, it had an immediate success: since its opening in 1967, it has become a true model for all privately owned public spaces in New York City. Its 400 square meters surface testifies that you don’t need, as you may envision, a big space for a park to grant the well-being of its users. 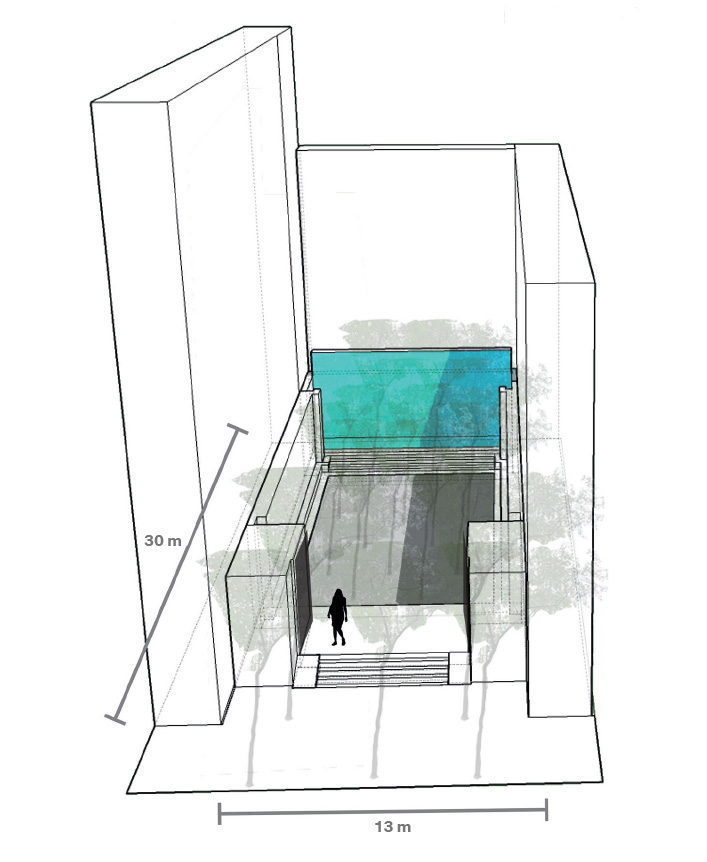 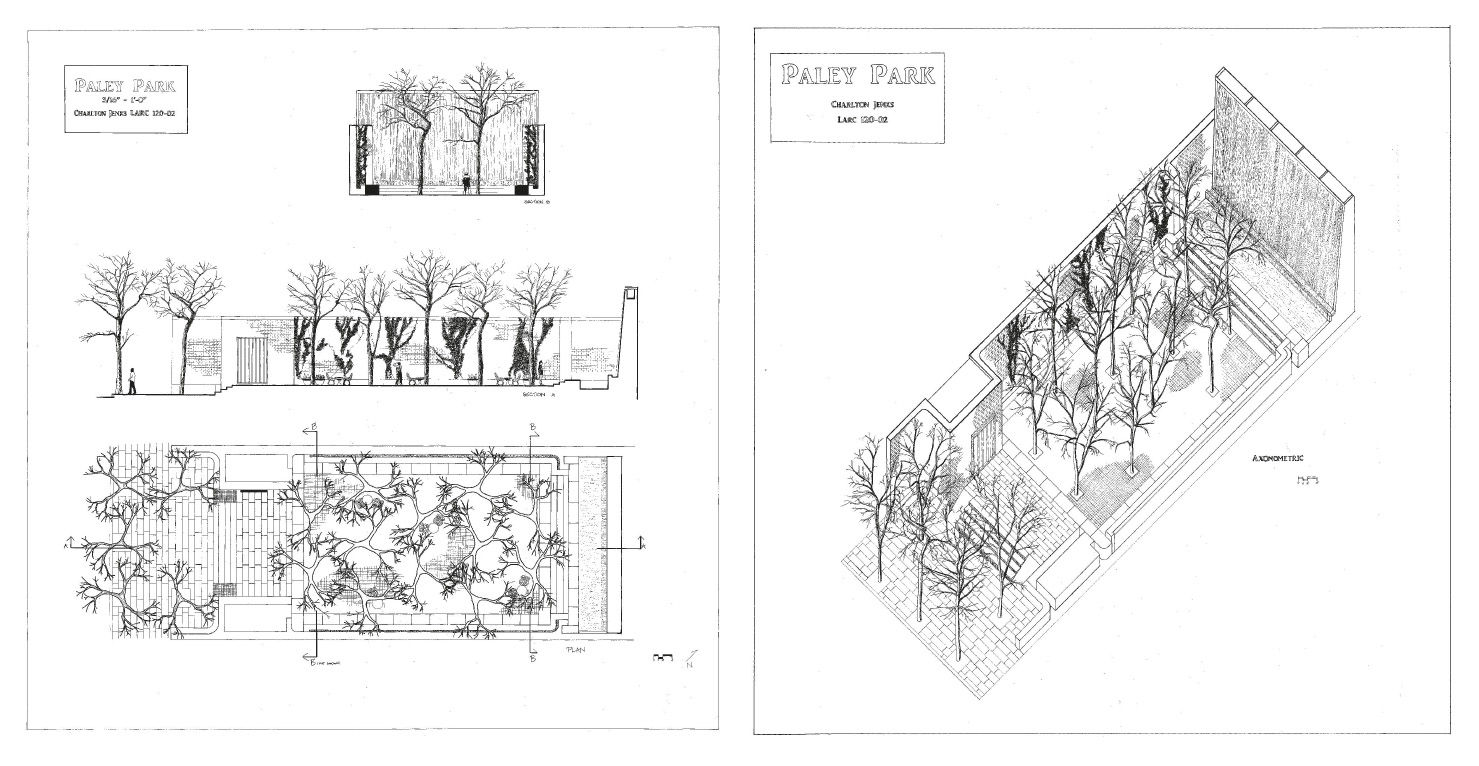 The park’s waterfall covers about 20% of the total flooring and wall surface. Its sound can reach 87 decibels and can be heard even from the sidewalk: the water feature is noisy enough to muffle traffic, noises coming from the street and conversations of those who approach the waterfall, but this sound is not as invasive as to become unpleasant; on the contrary, it contributes to relaxing both hearing and sight.
By pushing the tables and the 1952 Bertoia Outdoor metal wire chairs aside, users can choose the noise level that best suits them. The possibility of choosing and customizing one’s experience inside the park also pertains the type of thermal environment, as the waterfall significantly cools down the surrounding air. Even though involuntarily, children play in the mist and make the water forming on the ground splash around, embracing a multisensorial experience which augments the positive physiological impact of the waterwall. 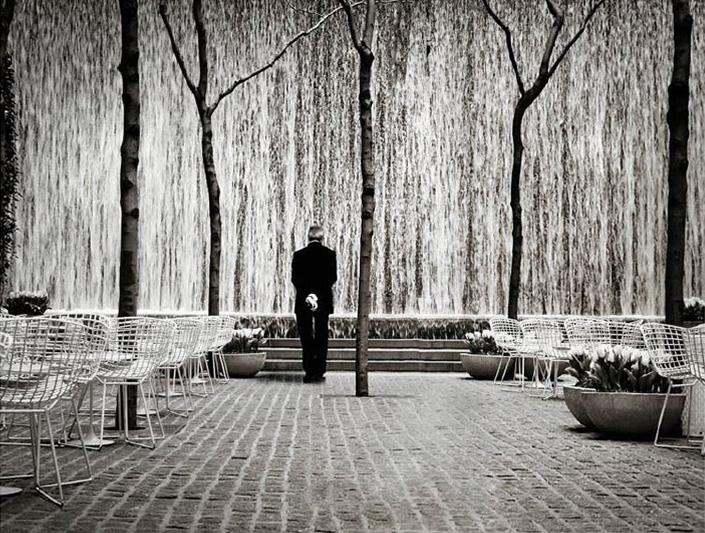 The physical features of the waterfall contribute to the amplification of its impact on space. The big vertical aggregate where water flows indeed distinguishes itself for a marked superficial roughness that gives birth to turbulent water flows which increase the sound, the quantity of mist and the visual interest of that function. It is precisely by opening up towards the water that the space also attracts people from the street.

Taking a closer look at the fountain, we can notice that its surface is inclined by about 10 degrees backwards so that the big stony aggregate allows water to break and ripple towards the pool placed at its base. This feature increases the surface, thus the rate of the water feature’s evaporation potential, so much that, especially during hot days, the park’s environment is notably fresher in comparison to the surrounding area. 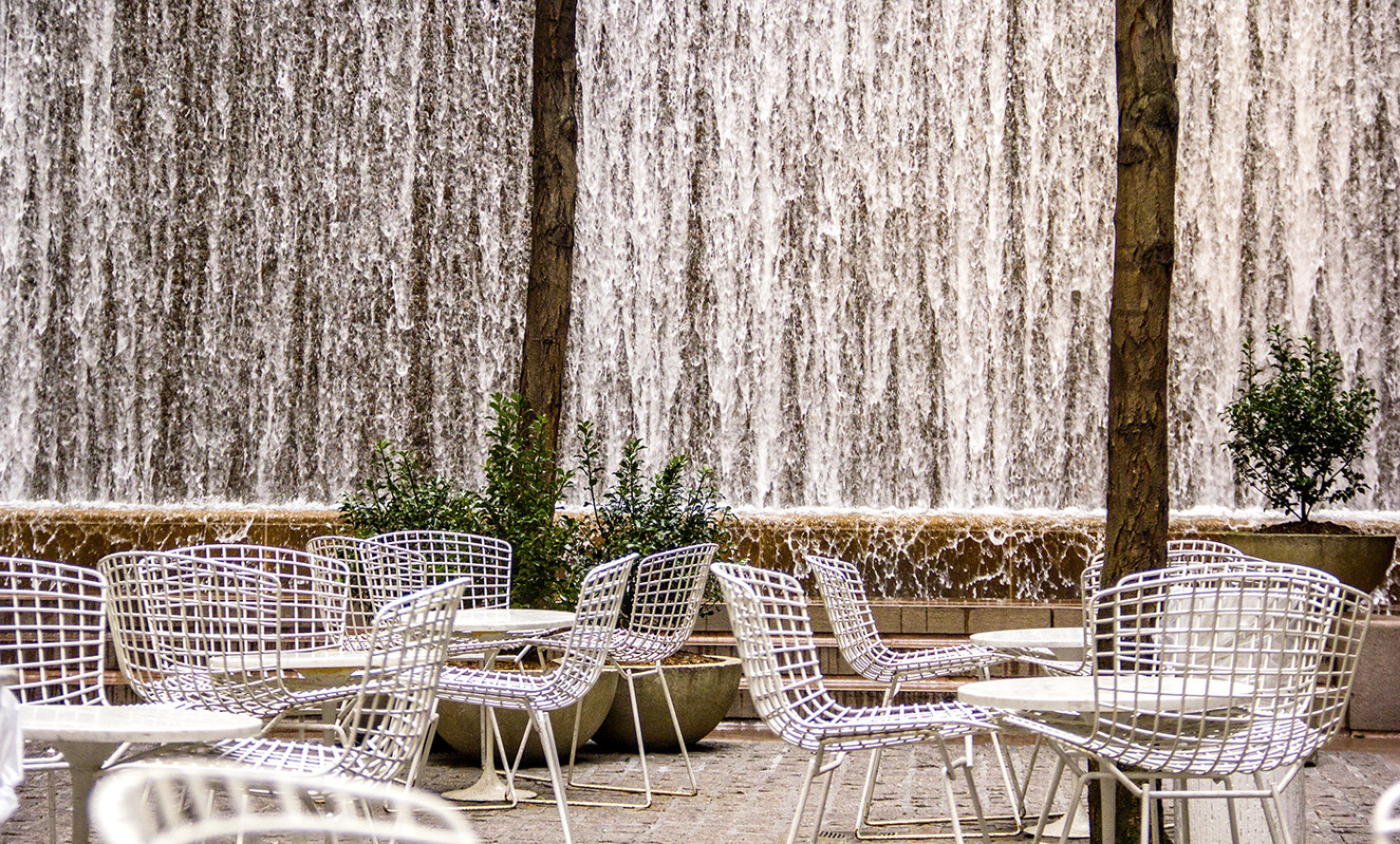 ↑ A closer look at the waterwall

As far as lighting is concerned, 8 lights for each vertical side of the wall highlight the texture and depth of water.

From the viewpoint of the setting up of space, the iconic metal wire chairs designed by Harry Bertoia can be moved by visitors according to their necessity and, from this perspective, they represent a precious, flexible element within a fixed and virtually symmetrical composition.

In order to divide the park from the street, three steps and two flights of stairs next to the threshold invite the visitor to climb up further. 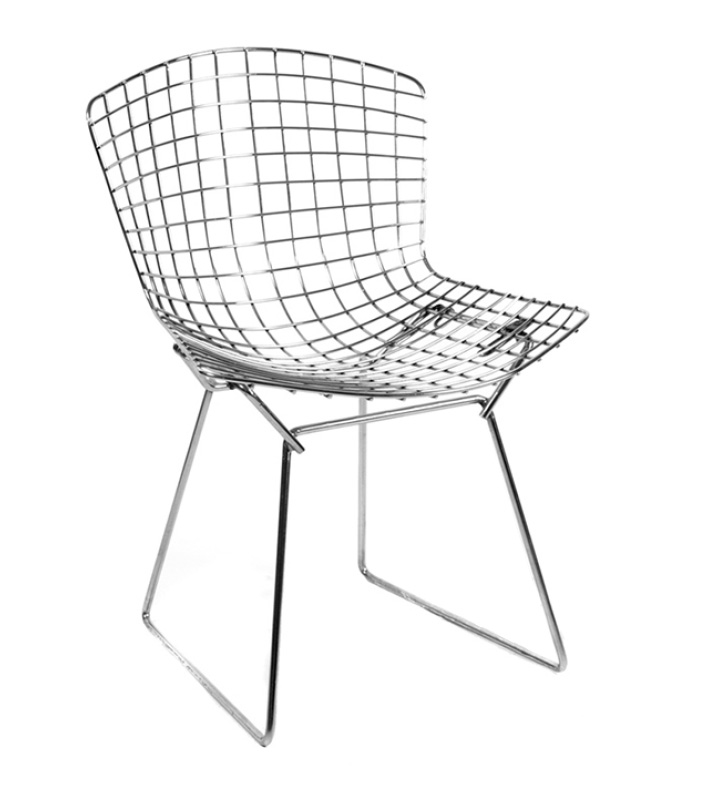 But the real beating heart of Paley Park is precisely the 6 meters high and 12 meters wide waterfall where as much as 7,000 liters of water fall every minute. The water wall looks like a big abstract monochromatic painting with shapes and hues which are constantly changing.

On the base of what we have learnt about the Lenard effect, again, the waterfall is perfectly capable of producing those small negative ions that can purify air and increase the physical well-being of guests. It provides both a shiny animation and a ‘white noise’ capable of muffling the acoustic noise generated by traffic: the park is a welcome outdoor den used to relax, have dinner, read or catch up with friends. Especially in high-traffic areas, the sound of flowing water indeed covers the effects of acoustic pollution and fosters a sense of calmness.

Another significant element from the standpoint of sustainability and the promotion of a comfortable microclimate is the Boston ivy planted on side walls, which Zion and Breen used to call ‘vertical lawns’. This choice both weakens the sensation of closedness linked to the size of spaces and does not require any of the cares normally needed to keep a traditional lawn.

This happened long before botanist Patrick Blanc showed his first vertical garden to the public at the Festival International des Jardin di Chaumont-sur-Loire in 1994.

→ Shapes and colors of the waterwall are constantly changing

↓ Boston ivy on the walls 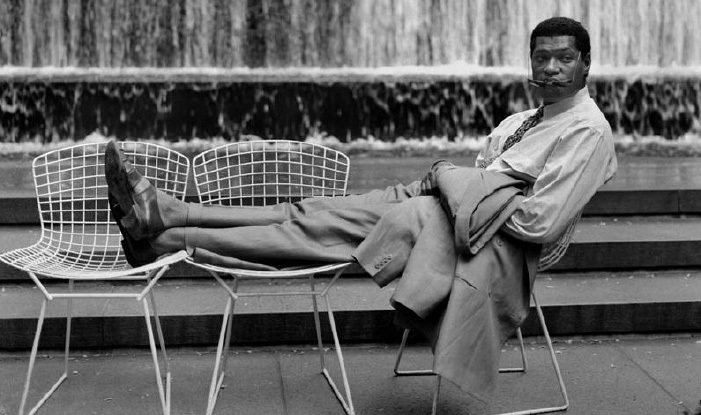 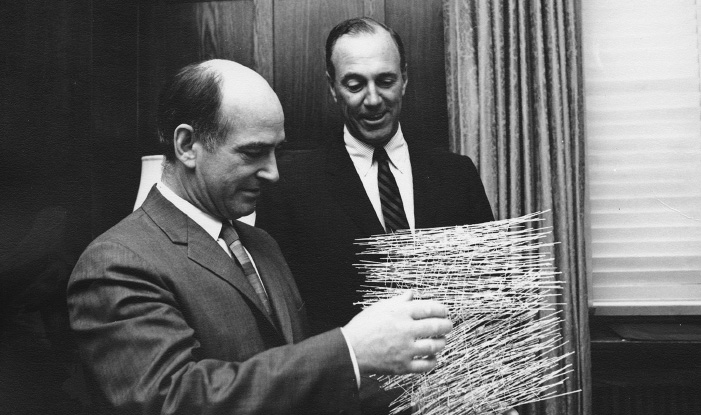 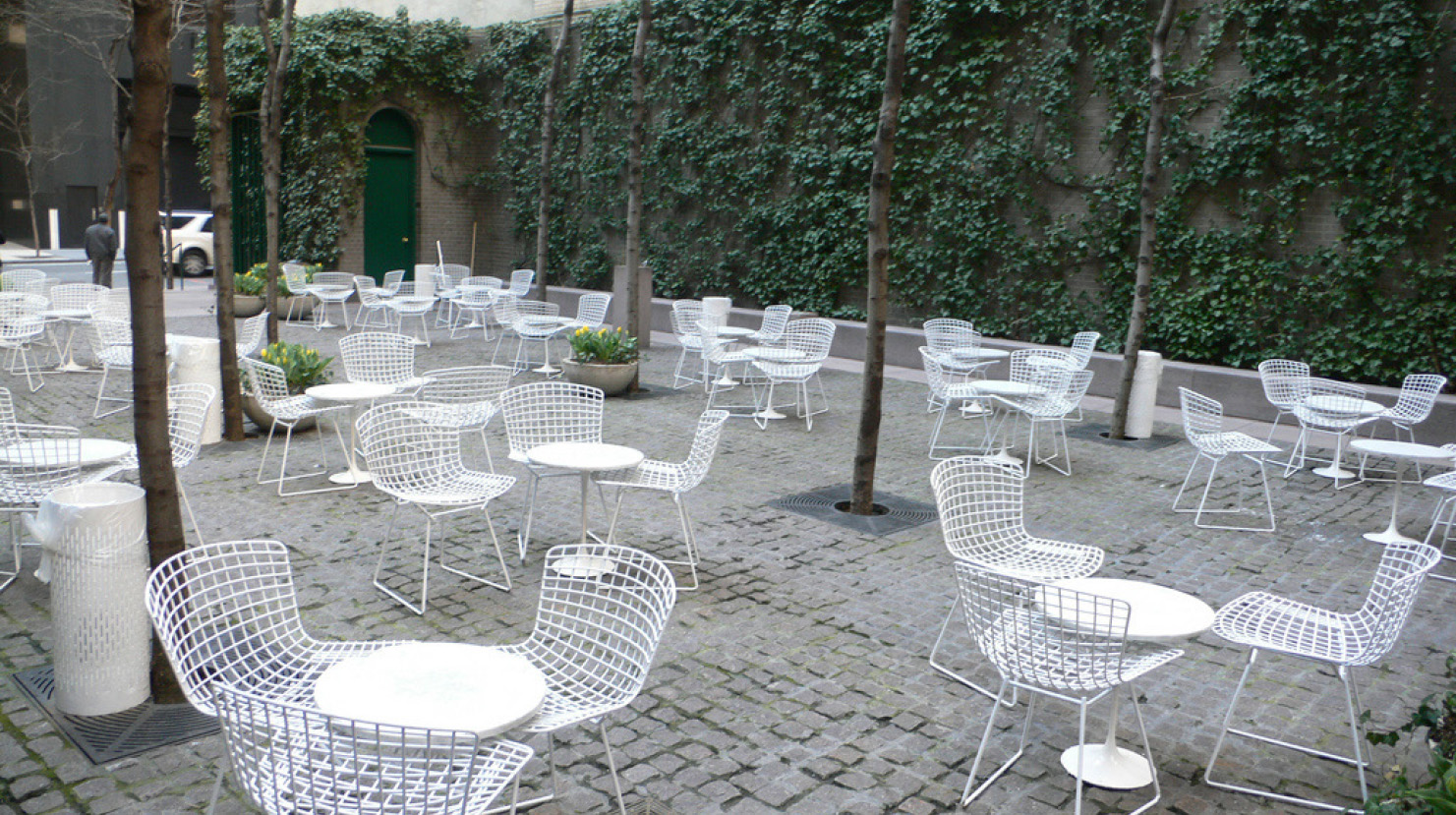 The 17 acacias distributed across the park also look like the perfect choice in their quincunx pattern, spaced out by 3,6 meters rather than arranged in rows. During the winter months, when the warmth of sun is most welcome, trees conveniently shed their leaves; when they still have their leaves on, on the other hand, they show a pretty yellow hue during fall and a delicate protective structure in the hot season.

The architects indeed wished for the vault made by acacias to ‘create a solid shadow roof and a uniform and relaxing silhouette’. It is worth remarking that this choice reveals a great impact under many aspects: alongside with constituting a refuge, the vault created by acacias is capable of containing the dispersion of those negative ions which are so useful for our well-being (see also positive and negative ions: risks and benefits); in such a way it is possible to foster a microclimate which is not only fresher, but also regenerating due to the benefits linked to the levels of serotonin that such ions bring to human body. 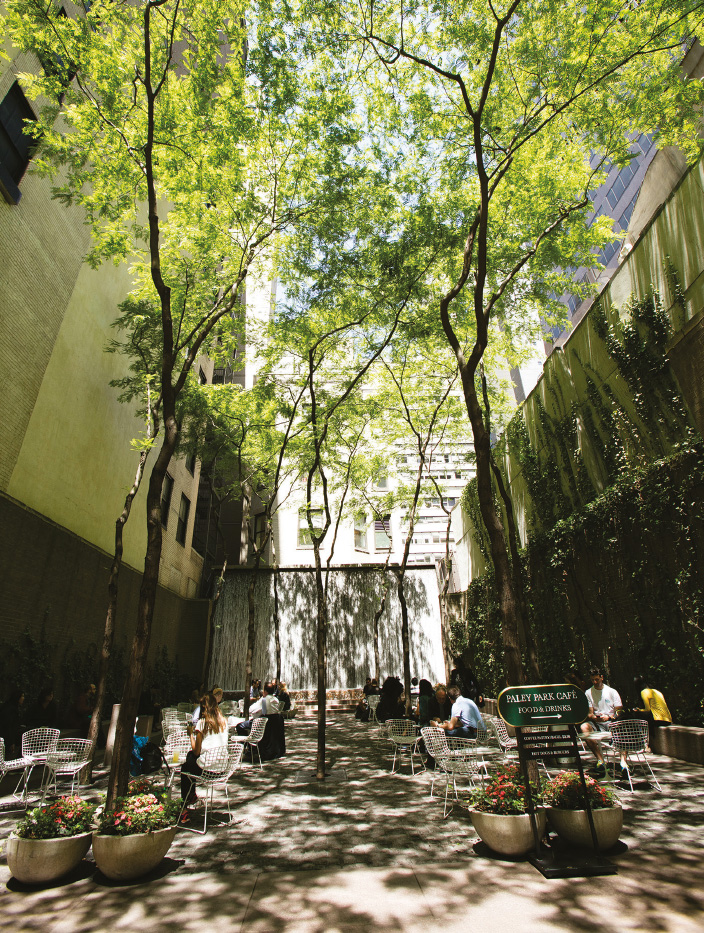 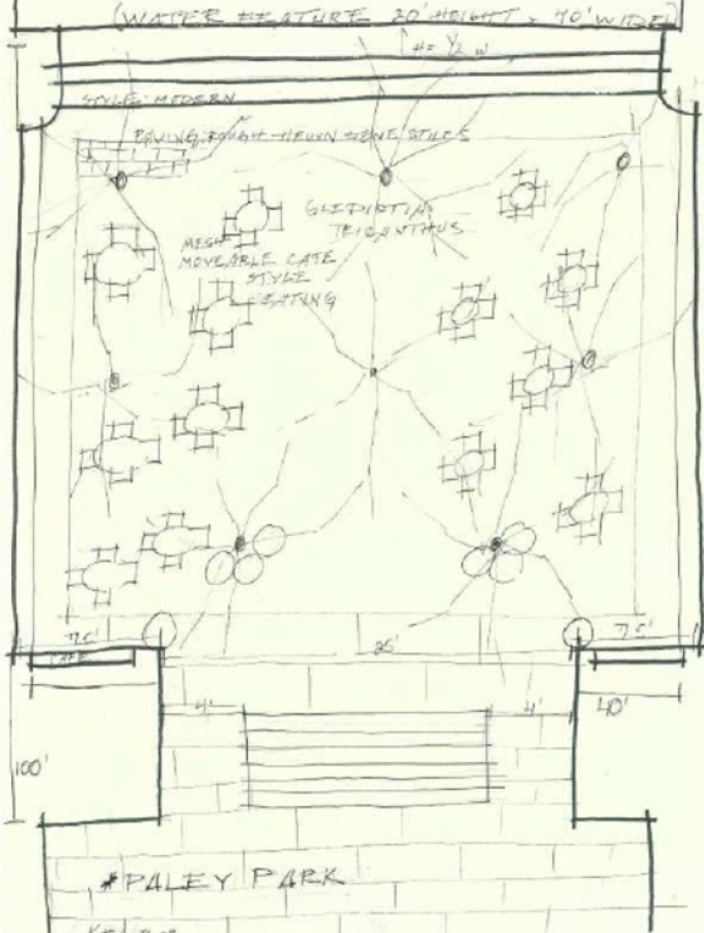 Here is therefore a practical instance of how the action of a water item can be reinforced with luxuriant greenery, with trees and shrubs blocking aerosols in an area where we want to get the benefits of negative ionization.

With more than 500,000 visitors per year – that is 60 per hour – Paley Park is currently the most popular park in New York as far as square meter crowding is concerned. 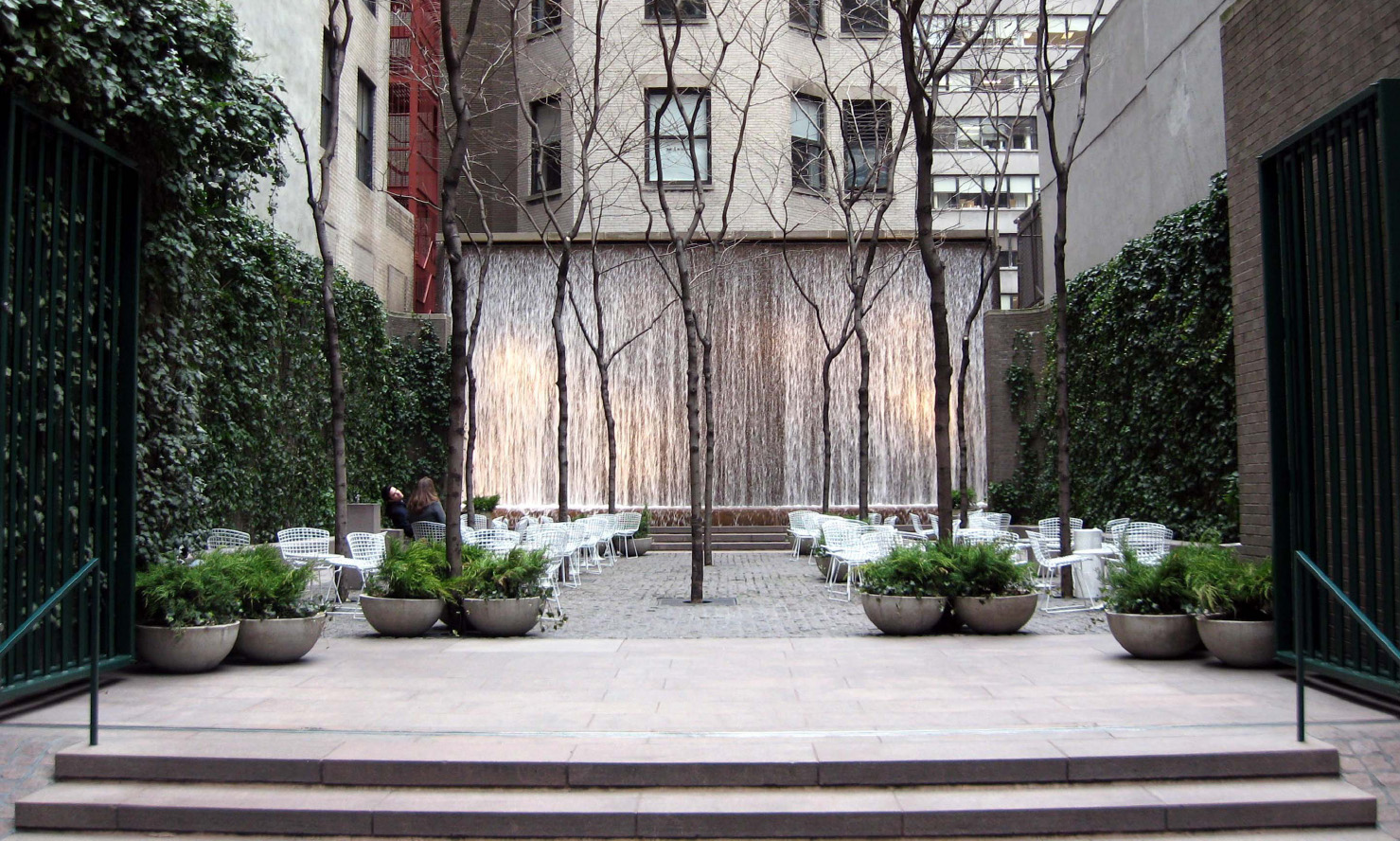